Achromatopsia or Color Vision Deficiency - CVD is a relatively rare condition that manifests in many ways. The inability to differentiate red from green is probably the common form of color blindness that affects more men than women - 7 % of US male population as against just 0.4 % of female. But blue/yellow color vision problem, though rare, has no gender bias. Total color blindness or Achromatopsia is comparatively rare.

Color Perception: Every human retina has about 6 million cone cells of three types sensitive to the primary colors - Red, Green and Blue. The photo pigment each cone contains is specific to one particular light wavelength. A 'normal' color vision implies that all cone receptors have equal response to the narrow band spectrum of color human eyes can perceive.

Human retina also has 120 million Rod cells which can perceive fine details and gradations largely responsible for visual acuity. Thus it can be seen that a human eye is 'designed' to visualize more monochromatic details than details in color. 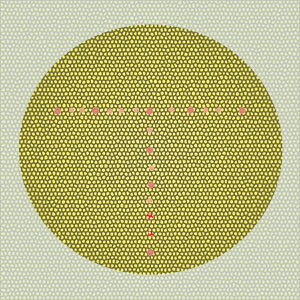 Causes of Achromatopsia: Most color deficiency issues are inherited. Other causes of acquired Achromatopsia can be due to the following chronic conditions:


Some drugs such as antibiotics, antihypertensive, barbiturates and drugs to treat psychological and CNS conditions can affect the color vision. Industrial chemicals like CO, fertilizers, solvents and lead can hurt the color vision on prolonged exposure.

Treatment: There is no treatment for inherited color blindness. In the case of acquired color deficiency problems, removal of the causative condition may help to regain normal color perception over a period of time. But usually there is poor prognosis for most color blindness conditions. Most patients generally adapt to their abnormality by looking for other subtle cues.

Although the precise cause of Optic Neuritis is unknown, it is an autoimmune disorder. It usually occurs in children and young adults below 40 years of age. It can involve one or both optic nerves. It is more common in females. The annual incidence is approximately 6.4 / 100,000. Studies also reveal that about 1 in 5 patients who have had a first episode of optic neuritis are likely to develop nerve problems elsewhere in the body, or will develop multiple sclerosis.

Normally, the body's immune system fights infection by creating a reaction that can combat viruses, bacteria, fungi and others. But in autoimmune diseases, this reaction is directed against a normal part of the body instead of the inflamed part. In case of Optic Neurosis, there occurs inflammation and destruction of the protective myelin sheath that insulates the optic nerve by coating it and direct damage to the nerve axons leads to loss of vision.

In Optic Neurosis, the loss of vision can be sudden or develop gradually over a period of time. Vision loss may be partial or complete or may be only a certain part of the visual field. It is recommended that a person experiencing a first episode of Optic Neuritis undergo MRI of the brain. This can help identify for central nervous system lesions and the MRI can reveal an enlarged optic nerve. Other symptoms include loss of vision in one eye even for an hour, loss of color vision (achromatopsia), changes in pupil's reaction to bright light, and pain when the eye is moved.

Appropriate therapy is instituted depending upon the underlying cause of the infection in case of other autoimmune diseases. In some cases there can be no conclusive treatment as even oral and intravenous steroids, when used in treatment, do not have any long-term acuity and instead risks of side effects can be significant in some patients.

However, there are chances that normal vision returns within 2 to 3 weeks with no treatment. Corticosteroids given intravenously may speed up recovery whereas oral steroids may increase the chance of recurrence. Further evaluation can determine the cause of Neuritis and the underlying condition causing the problem can be treated.